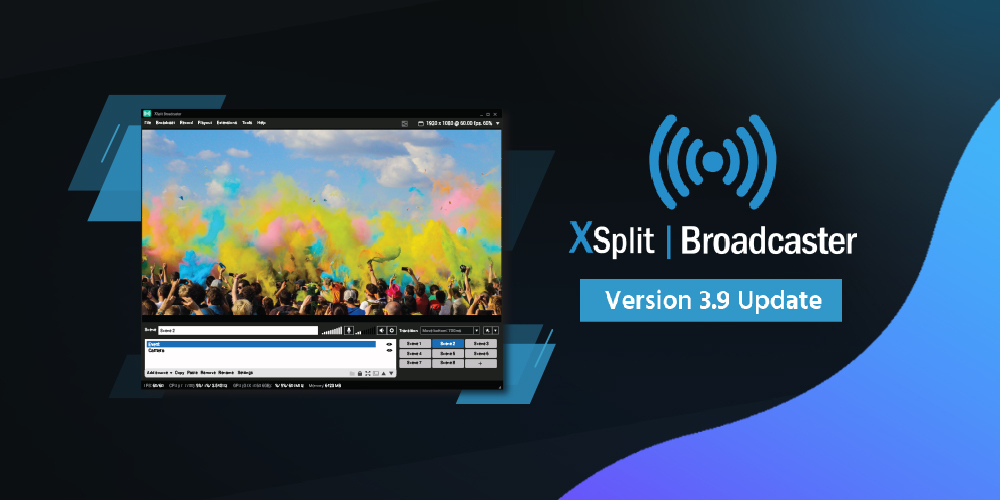 An update for XSplit Broadcaster 3.9 is now available and it brings a whole host of new features that have been long requested by the community. From finer color correction controls using LUTs, to the ability to override the transition for a specific scene. In this post, I’m going to go over what I feel are the coolest new features we’ve added in this update and what you can expect going forward.

You can update to this version in-app or download it from the Broadcaster page.

Color look-up-tables (LUTs) allow you to recolor a source using an image representation of the spectrum of colors. It essentially remaps the colors from the LUT to your source. Quite a complicated way of saying they recolor your images. They look like the image below and we’ve included some examples to help you get started using them quicker. There’s a full guide here if you want to create your own.

In addition to LUTs, we’ve also added some filter effects you can use that will allow you to do things like make your camera look like an old movie. You can access LUTs and Filters via the source properties window in the effects tab.

When you’re streaming, you want to be able to see all of the information that’s important to you. That’s why we created the Stream Dashboard extension. It works with the four main streaming services, so that’s Twitch, YouTube, Facebook, and Mixer. It will show your chat, stream stats and then all the events you receive whilst streaming such as followers, subscribers, likes, etc. This is all inside a singular extension that you can drag and move around. There are a few improvements we’d like to make in terms of the flexibility in size each of the panels can be but this already simplifies a lot of things without needing to have a bunch of browser tabs open.

We understand that setting up your scenes and getting it to look great can take considerable time and effort. You may already have your dream setup in OBS but would like to explore what other options are available. That’s why we made the OBS Scene Importer extension. It allows you to take what you’ve already created and import it into XSplit Broadcaster so you can get started quicker. We’ve aimed to cover as many sources and properties as possible to make this a seamless experience. All it requires is for you to export your scene collection from OBS and then import using the OBS Scene Importer extension. From there we do all the hard work of importing your hard work.

For the longest time users have asked for the ability to record something different from what is being streamed and we’ve finally made that possible with per scene recording. Now, you can specify which scene gets recorded. Whether that’s the live/active scene or one of your choosing. This is useful if you want footage without overlays or other elements. Combined with our automatic application audio track, you can record your game with only the game audio whilst streaming at the same time.

Sometimes you want a scene to have its own transition. A common use for this might be a replay scene which when you switch to it, will play a replay. Now you can make that scene use its own transition like a 3D animated replay stinger. Whilst you could do this before by manually switching/changing the transition, it would require thought and effort. Now it’s just a set and forget which will hopefully make producing shows that much easier.

The best thing is, these aren’t the only features we’ve added in the latest patch. We’ve made a ton of improvements across the board and will continue to do so. We know we still have areas we need to work on, audio is one of them but we think we’ve made good strides with the Audio Mixer extension. Next up is the ability to use DSP effects such as compression and equalization with the next major update. Of course, there are smaller things we can do to improve too like showing audio meters for individual sources and more.

So, those are the key highlights of the recent patch and what we are looking to do over the next short while. We’ll continue to push regular updates to the Public Test Release (PTR) as and when they become available to allow you to get hands-on features before we release them to the open public. If you want to reach out to me or any of the XSplit team, you can join our Discord and message us there. Additionally, you can post on our community forum or hit me up on Twitter.

Let us know your thoughts about this XSplit 3.9 update in the comments section below.

Gareth ReynoldsSenior Product Manager for XSplit. Self confessed gamer and nerd. You can find me on Twitter - @gazreynMore from this Author