If you play games and are somewhat savvy to the the gaming industry and fandom that surrounds it, you will no doubt have stumbled across the work of Mega64. Whether it is through their strange camera skits parodying popular games, or meme-starting comedy shorts featuring an array of celebrities like Gabe Newell, Cliff Bleszinski and Ken Kutaragi.

When not taking part in an array of popular gaming conventions, Mega64 are also known for their anarchic live show that streams live on Twitch every Sunday.

In this two part interview we had a chance to speak with Garrett Hunter and Eric Baudour from the team to discuss their roles in Mega64, and how they utilize XSplit for their live streams. 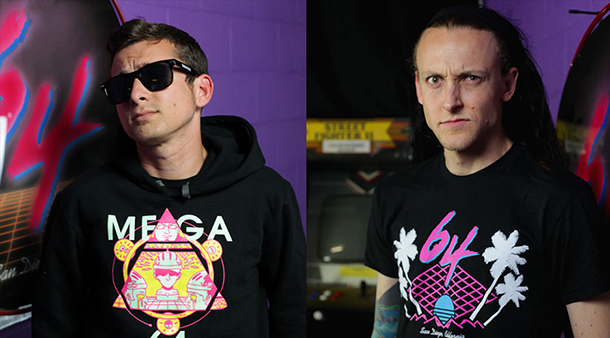 Q: For our readers who may be unfamiliar with Mega64, could you in your own words tell us about what you guys do and your own roles within the group?

Garrett:  Mega64 make video game skits for the internet, and all of our humor is based in and around the video game universe. It’s been described before as Jackass meets gaming, because we do a lot of skits out in public where we parody all aspects of video games.

The other guys; Rocco, Derrick and Shawn have been doing it for eleven years now and they have pumped out three seasons of a pretty well received (I’d say) serial episodic show and, from there, started doing multiple ads for different video games and then getting involved with different events in the industry.

My role is primarily special effects, makeup, props and costumes. Lately we’ve been kind of splitting off and doing our own little projects with live streaming. I do something called the Poorly Played Stream every Wednesday at 7pm pacific.

Eric:  I would say the important points to hit about Mega64 is that we’ve been around for eleven years, we’re outsiders that have been brought into the video game industry even though we don’t make video games, and through that we have notoriety and have had a lot of celebrity cameos and guests like Shigeru Myamoto, Hideo Kojima, Gabe Newell, Reggie Fils-Aime. We just recently did an ad with Nintendo to announce their E3 line-up and what’s going on this year.

My personal role in Mega64; I’ve been friends with the guys since high school so I’ve known them for over ten years and I am the Producer and Director of the podcast that we do every sunday “Mega64 Live” which you can see on Twitch TV. I get that altogether and produce it every week, we have an hour long live show followed by an after show where we take Skype calls from fans and interact via chat on Twitch and we run all of that using XSplit.

Unlike a lot of folks we interview, Mega64 have worked across a variety of entertainment mediums, how would you say Live streaming differs from creating VODs, Podcasts and live panels?

Eric: You know, I don’t know that it differs all that much. We try to bring a lot of energy to everything that we do for video. The guys, Rocco, Derrick and Shawn all started with a theater background, thats where they met. So when we do panels and we do live events, we try to do it where we don’t just walk on stage and go “hello we’re Mega64, lets take questions” – its a big video thing and we go crazy and there’s a lot of dancing! With the podcast we do every week “Mega64 Live”, we do all that kind of stuff and XSplit really allows us to do it well, we have multiple camera setups within our scenes a lot off our show will devolve into dancing and crazy bits, and a lot of costumes.

Garrett: It’s always kind of an improv situation when we’re filming, when we’re streaming or when we’re doing the live event stuff as well but especially on the podcast and the streaming stuff, anything can happen it’s always kind of just fly by the seat of our pants like what are we gonna need to switch to. Eric’s mentioning that XSplit is what we use to get that across.

Eric: Right! XSplit actually allowed our show to be as dynamic as we are in a live theatre type setting. Before, we were doing a single camera show that we would just edit, and put pictures into and things like that. Now everythings a lot more on the fly and we have a multiple camera setup. That allows us to do a lot of close ups, a lot of wacky kind of cuts in and out, cut to video. Just a lot of just crazy stuff that allows the show to be as dynamic and interesting as it is when we do it live.

Have you noticed any changes in how your community interact by keeping the show live? Even though you’ve obviously done Mega64 on the stage, do you still see that same audience dynamic when performing on a live stream?

Eric: Oh absolutely!  We constantly have to monitor Twitch chat and everything, but then through XSplit we can go through Skype to take calls, and we’re allowing our viewers to call in, and we can put their little video feed in the bottom corner of our screen, so that everyone watching at home can see what we’re seeing of the people calling in. So it allows us to have that crazy off the cuff improv quality that we have even when people are asking questions, so we can still have that live dynamic even in a podcast setting.

Garrett: And I think that allows for some of the best moments in our show where we get that window through Skype into someone elses bedroom and you can see the posters on their wall and we can goof on them, and the interactions that we get out of that are definitely my favorite thing. We get to connect with our fanbase.

Garrett: For my stream on Wednesdays, I take Skype calls almost through the entire hour and a half. It gives me the ability to bounce a conversation off of someone where I don’t feel like i’m just sitting there, playing a game and talking at the screen, because a lot of times I’m there by myself.

You guys have been creating gaming related video content for over a decade, did you notice a shift with the introduction of Twitch?

Eric: Oh god yeah. I mean, we were running stuff on like Justin TV and UStream back in the day when we got started. We used to do an audio only podcast for probably like 60 or 80 episodes where we were putting it out weekly.

Garrett: And it wasn’t live, it was just pre-recorded. There was no live streaming when we started.

Eric: And so we started recording it and creating a video podcast and editing that, and then we started doing it live and then moved to Twitch. We kind of went out of our way to find what kind of streaming program we could use and XSplit has really helped us in that.

Garrett: And that was where we really connected. Our core audience was already video game players, and with Twitch being such a gaming centric site, the service really sucked us right in with the community we were trying to touch base with in the first place.

Eric: I noticed a real big jump in viewership when we moved to Twitch, and they’ve been a great partner with us, just putting us on the front page from time to time on Sunday nights, because I don’t know if everyone is playing League of Legends on Sunday night or not, but sometimes we end up on the front page and if you don’t know Mega64 you see this zany like almost living room type program where these friends are just kind of going nuts and riffing off each other.

Garrett:  It’s nothing like a top down Starcraft match (laughs)

Eric: Exactly! Its the opposite thing you expect to see when you load up Twitch, I mean we would just love to do some top-down Starcraft maps for our podcast, but through Twitch we’ve noticed a jump in viewership when they put us on the front page and even without it we get more and more viewers week to week. XSplit helps me track how many people are viewing this right now, what was our peak viewership and things like that. Its been really great, the advent of Twitch I really I think improved our show on a whole.

Check back later next week for our second installment of our two-part interview with Eric and Garrett from Mega64.