Window capture: This is when you select and capture a desktop window or a region of a window.

Desktop capture: This is when you click and select the entire desktop or a region of the desktop.

After adding a screen capture source to XSplit Broadcaster, you can right click the source and look at the properties page. In this example, I have selected a region from a window which is referred to as Window Capture as denoted in the title. 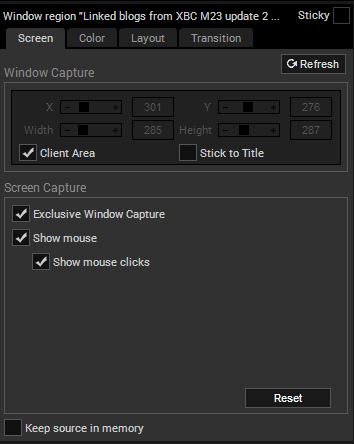 Only window capture can be exclusive, which means the window or region of window that you capture will still show in its original form no matter if other windows are on top. If you disable the exclusive window capture mode, you will notice that the windows on top of your captured window will show instead.

Generally window capture with exclusive mode turned off and desktop capture use the same underlying technical capture method which is completely different between Window 7 and Windows 8.

Common problem you may experience with screen capture

This simply does not work properly. Windows 7 with Aero mode cripples desktop capture and it is for a good reason that Microsoft themselves switches to basic theme when using remote desktop for example.

Ignoring the warning can lead to a slowdown of the entire graphics system.

What you can do about it

If you need to use desktop capture on Windows 7, then your best choice is to switch to basic theme (or upgrade to win 8.1+). If you remain on Aero theme, then you need to stick to window capture only and make sure the exclusive property is enabled.