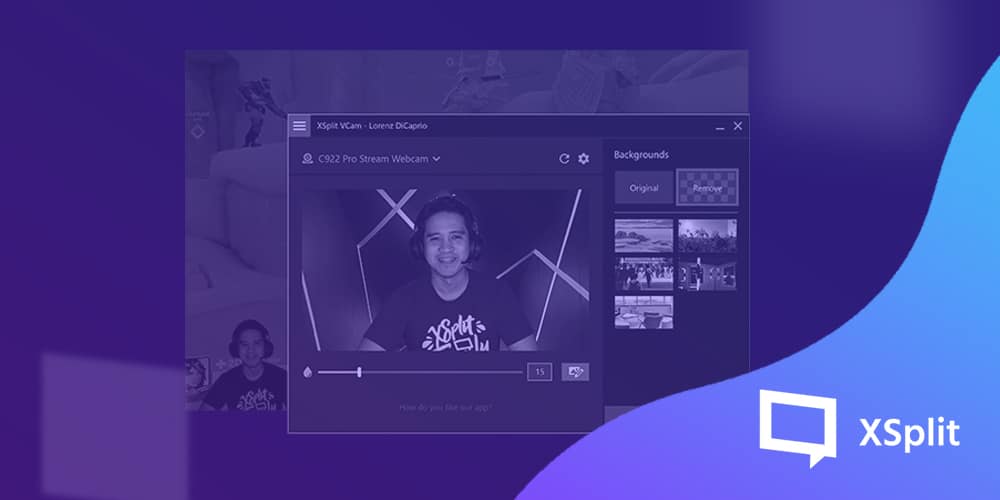 Background removal used to be something that can only be achieved with a set of equipment and a suitable studio setup. That was fine and all because the application is for professional production environments such as newscasting, motion pictures, and TV work. Anything but casual basically.

With content creation coming more into play, it became apparent that removing backgrounds (known as chroma keying) had to be easier. Simply put, very few people can’t afford to have their own studio space, green screen, and a bunch of lighting, to name just a few!

With great demand comes innovation resulting in various applications like our very own XSplit VCam, bringing exceptional background removal and replacement with the click of a button.

VCam came into the market in 2018 but applications that promised background removal existed before that. As a matter of fact, XSplit Broadcaster had chroma key capabilities in as early as its beta period and the same can be said to similar applications such as Wirecast and Open Broadcaster Software.

It was far from ideal still back then as those apps only provide you the functionality to “remove your background” but only once you have everything set up correctly. That means you still needed to have a green screen, a ton of lights, and not wearing a green shirt (though this led to a lot of unintentional comedy in the early days!). It wasn’t easy but at least the tools were getting easier to use!

Even with some gradual improvements each year, it was clear a lot of people just didn’t want to put up with the work. Perhaps all they wanted was to flick a switch that removes their background, get a screenshot and that was it. Using a streaming app to finetune a setting by adjusting sliders and still not get a guarantee they’d be getting what they want was just too complicated.

With enough demand, background removal software has naturally morphed into its own thing. Standalone apps such as Chromacam and Tridef have come into play while websites that offer the same service but just focusing on static images also started cropping up.

It didn’t take that long for people to really embrace chroma keying their background and it, later on, became a necessity for content creation. The need for background removal didn’t just remain in live streaming as a huge market for video conferencing and online business presentations showed up.

The use case for background removal started with professional video production work and grew into casual content, mostly video games. It did not stop there. With people being forced to work from home, it became an even bigger necessity for remote work and video conferencing since most people simply didn’t have that same luxury of having a dedicated office space at home.

Fast forward to today, top web conferencing services such as Zoom, Skype & Microsoft Teams have added built-in background removal that can be accessed with a click of a button. Pretty convenient, but is the quality there?

Why should you still use VCam then?

Three things. A far superior background removal AI, better customization options, and more optimized experience both for you and your CPU. 🙂

That’s not to say the built-in solutions from those web conferencing apps aren’t useful. They very much are especially if you just want the bare minimum and don’t want to install a separate background removal app like VCam.

But with the need for background removal becoming long-term because of the pandemic, I’d argue that investing in a superior app is the right way to go.

Don’t just take my word for it. Here’s a quick video that demonstrates how VCam fares with the competition.

Without elaborating too much on technicalities, XSplit VCam relies heavily on the machine learning model that enables the application to continuously improve over time.

Side note: Intel produced an informative whitepaper on the subject of intelligent and real-time video background removal which mentions VCam. Definitely check it out if you’re curious about how that works.

Remember, there are plenty of variables to consider when it comes to how a user’s webcam looks. From lighting to the cat sitting on the bed behind you. So while perfection may seem far fetched when all is said and done, all this data allows VCam to continue getting better.

And that gives me the perfect opportunity to segue into the latest XSplit VCam update that you definitely should give a try if you haven’t yet. Boasting an even better AI detection and flexible adjustment options, VCam 2.0 takes the best background removal software and makes it even better. Learn more about it in this blog post.

Where does that leave us?

All of these innovations, in addition to having more companies trying to have some form of background removal and replacement integrated into their own software, is a big win for consumers. From the early days where it’s simply not accessible, to now where it’s become easy to use, the future is bright when it comes to advancements that can be made here.

That also means we should work harder to remain on top of the game for background removal. Not that we have a problem with that. 🙂