How to Stream Magic: The Gathering and other CCG games 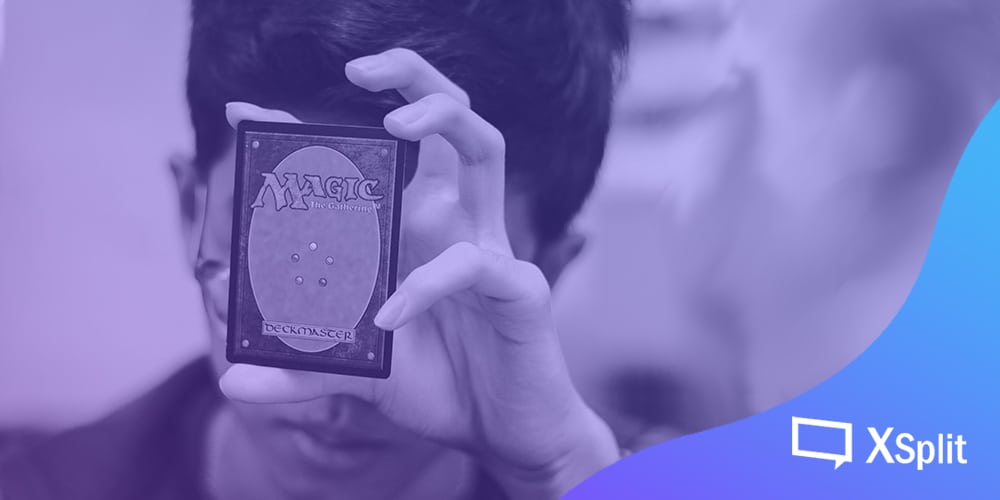 Editor’s Note: Whether it’s Hearthstone, Gwent or the granddaddy of them all Magic: The Gathering, Digital CCG games have never been more popular. From cracking packets to skillful deck building, these titles have become a pillar in esports and Twitch live streaming, with top tier prizes, celebrity pro players and tentpole announcements at events such as Blizzcon.

But what if you want to go back to the routes of CCG, broadcasting real head to head matches within your own community. Jeri Reyes, an active member of his own M:TG community has provided a round-up of helpful tips and content ideas for whether you want to stream Magic: The Gathering or any number of other popular collectible card games.

If you’ve been around and aware in the mid-1990s and early 2000s, chances are you have witnessed a crowd of people intently watching a certain card game. Heck! You may even have a couple of friends who got hooked on that card game, cutting classes just to hang out in an LGS (local gaming store/shop), whiling away their time, flipping and tapping expensive cardboard.

That card game is Magic: The Gathering, recently dubbed as “the world’s most complicated game” and…wait, what? What’s Magic: The Gathering? Well, for starters, it’s a popular card game which is the brain-child of Richard Garfield and published by Wizards of the Coast. You essentially role-play as a Plainswalker and build 60 card decks with spells, creatures, and artifacts to duel your opponent with and there are lots of ways to achieve victory, besides hammering down your opponent’s life from 20 to 0, milling out their decks, locking down their resources (STASIS LOCK!), and so forth and so on. Anyway, as I was saying, despite numerous points in time where doomsday prophets announced its demise, M:TG has been going pretty strong decades after the fad was supposed to die out into obscurity like their other contemporary CCGs/TCGs (Collectible/Trading Card Games). Sure, the local community is no longer as numerous and influential as it was back in the olden days (I started playing back in ’96) but there is still a solid following as new sets roll in and new players replace old ones… ones who strayed far from the ways of the Plainswalkers.

The advent of technology may have altered the definition of “hobby” as traditional tabletop games gave way to MMOs, MOBAs and other online/mobile games. Similar to other trends that endured, M:TG assimilated technology and gave us M:TG Arena, an online, micro-transaction laden game that mirrors what online games generally are these days. Social media has also made the hobby very accessible, both for those looking for information and updates as well as those seeking all-powerful pieces for their physical decks. In line with this, however, I would like to point out a generally “untapped” (cheers! If you got the reference) online resource in the local community: Live-Streaming.

Though M:TG Arena has no shortage of those; well, you know, being an online game and everything, actual live casual tabletop duels, multiplayer pods and similar activities are generally limited to local gaming stores and/or private venues. Soooooo… please allow a self-styled, veteran Plainswalker discuss further. Shall we?

EDH or Elder Dragon Highlander or, simply, Commander, is a format in M:TG wherein you’ll construct a deck of 99 Cards around one Legendary Creature, your designated “Commander.” Imagine playing an online, PC or console RPG which allows you to customize your character’s creatures, resources, equipment, spells, etc., and you will get the feel of constructing and playing with an EDH deck. EDH sub-formats include Duels and Oathbreakers and everything in between, but the true challenge, in my opinion, lies in the multi-player format. EDH is a newer format that is not yet around when I started playing back in my day (HA! I bet you read that in an old-timey voice) and I find it quite appealing and refreshing. After all, it’s always good to explore something new and stored knowledge about the basic mechanics makes the transition a breeze. Anyway, I played my custom deck in a few pods against 3 to 7 players and I can attest that there is always something new to learn and see and something that will surprise even hardened veterans.

The very unpredictability of the format can actually be an entertaining live content as come-from-behind victories, early turn kills and unleashing ultimate, game-winning/changing, infinite combos are all regular fare even for casual EDH pods. I am pretty sure there are local stores who had done this before and, perhaps, doing it now during their tournaments or casual games but never on a regular basis as tournaments are far in between and casual pods are, well, casual. Raw, unedited and unregulated humor and interaction during casual games can be a bit too much for social media maybe?

The length of an EDH pod may vary as well, sometimes it takes an hour or so unlike the more commonly live-streamed Standard and Modern duels that resolve quicker. Minor issues aside, I see an opportunity here to inform and educate enthusiasts on how EDH works. Live-streaming an EDH pod regularly can actually be a nifty, little marketing and/or advertising stratagem that can encourage new and old players alike to try the format since not everyone has the time to hang-out in an LGS to watch an EDH pod of Plainswalkers throw down their gauntlets LIVE. EDH Deck-building can also be discussed and explored during live-streamed pods and also a few informal commentaries by the actual players to discuss their Commanders, cards being played and their interaction with the board as well as combos.

Though box-opening videos are not really something new across a lot of different hobbies – action figures, statues, video games, shoes, gadgets and what-not – Live box-cracking is something I rarely see in the local M:TG community. Big name YouTube sites like Alpha Investments, Bad Boy Gaming, Openboosters, to name a few, have made their names in the worldwide M:TG community doing box opening videos for their patrons or personal collections of M:TG expansions and special edition sets. Discussion of card values, strengths and weaknesses of the sets, speculations and chase cards are just some of the most common topics during unboxings.

Setting it up is also very simple to execute as opposed to live-streaming actual games but the level of interest and interaction can be, arguably, much higher than live-streamed pods. As any person who has experience opening random stuff in hopes of finding something of value (Hell! maybe even a priceless treasure!) will attest to, there is a certain charm in opening sealed booster packs with hopes of pulling a high-value chase card or an out-of-print gem. That excitement carries over to the audience as evident on the high viewership and subscription base of the aforementioned famous M:TG YouTube channels. A live-streamed box-opening video can be a very effective marketing tool for a local store or local trader/seller since there is always that hope of pulling-out “THE” card that everyone’s going crazy about and hunting for their decks or collections; especially from a newly released set, that will hold your audience’s attention and will keep them glued to the stream.

As I have mentioned, discussion on the financial value of the cards during box-openings are also commonplace so it is also a good way to inform and update the audience about current market price, spikes and speculations on the next big thing. The audience can even comment and discuss the expansion with the host in real-time and maybe even place their dibs or trade offers on some of the cards, well, if it’s a selling live-stream that is. Hey, speaking of selling…

Everybody loves a good bargain and it is instinctively human to buy cheap stuff, even those we don’t really need at the moment sometimes, HA! most of the time! Bargains are a test of willpower and the enduring balance between needs and likes. As it is, live-selling on Facebook is old news by now.

Clothes, accessories, toys, gadgets and any other brand-new or pre-loved items are, one way or another, being regularly sold Live. The premise is very simple and straightforward: Seller shows or, in some cases, wear an item; seller names an asking price then any viewer can haggle and/or call dibs on the item. One of the most awaited and highly-anticipated promotional stunts or activities in local M:TG communities are Fire-Sales which are usually conducted regularly by individual sellers or stores alike. Participation is generally high since there is a chance to get some mid- to high-value cards for a considerably lower-than-regular-market price. Generally, this is done on Facebook pages or groups but doing a Fire-sale live-stream is something that is rarely seen in the local community. Fire- sales are favorite hang-outs of casual players, collectors, pros and even resellers so you can be sure to have a decent number of audience, most of which are there to purchase/participate.

There are a lot of other things to discuss and opportunities to explore regarding Live-streaming in the world of tabletop gaming in which Magic: The Gathering is just one of many. Vanguard, Final Fantasy TCG, Warhammer, Pokemon and maybe even HeroClix, well, I think the last two are still alive and kicking. A potential hindrance to that opportunity though would have to be the limited online mobile access of a fair chunk of the target market but then there are always workarounds on such issues. Looking closer, I can still name a few more activities in the tabletop gaming industry that are ripe for live-streaming such as Booster Drafts, Pre-Release events, Collection showcases, etc. I feel we have just barely scratched the tip of the iceberg.