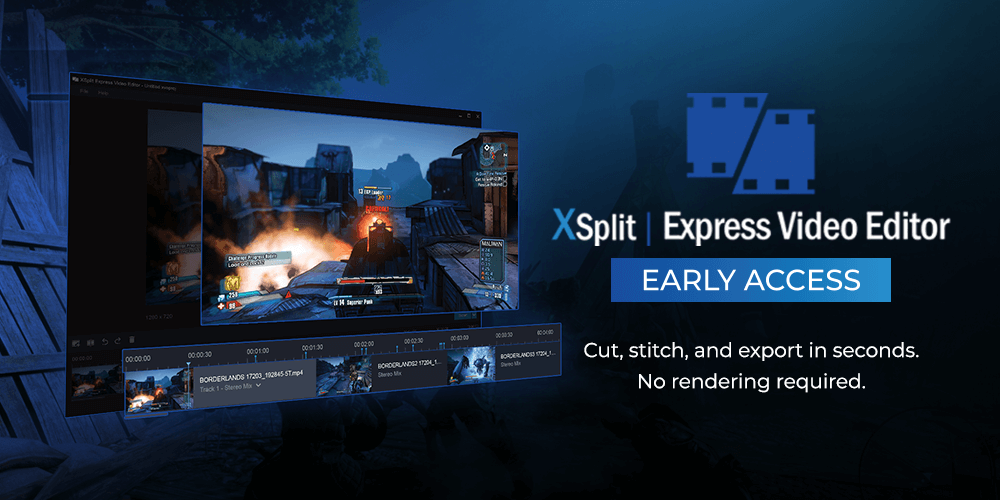 The new XSplit Express Video Editor is a sign of things to come and a glimpse of the direction we’re moving. It’s a completely free application that allows you to cut and snip video clips you’ve created and export edits within seconds. Its primary objective is speed. The methods in how we do it is quite simple, we’re not rendering. This means you can edit a 4K resolution file and save it out within seconds and without straining your PC’s resources. In case you missed the initial announcement, here’s a quick video about the newest member of the XSplit family.

The original video editor itself has lived as a tool inside of XSplit Broadcaster and Gamecaster since way back in 2014. For the people that managed to find it, the feedback was overwhelmingly positive but the issue was discoverability. The feature was hidden away in a menu with no real indication as to what it does. We saw an opportunity to make it available for free to everyone as its own product which would allow us to do two things; give access to a streamlined video editor to more than just Broadcaster or Gamecaster users such as the OBS Project and put more focus in to the product, providing regular updates and improving usability and features.

As you probably already noticed, the application’s initial feature set is identical to the existing video editor inside Broadcaster but with a new lick of paint. However, we’ve been planning out the next steps for the editor that will make it even more awesome and provide functionality that will allow you to produce professional-looking video content quickly.

We will be adding additional audio tracks in the near future as we feel it’s a fundamental feature needed for pretty much anyone creating videos. This will allow you to add music or sound effects to your project with an additional audio track for things like voice-overs. Transitions are another item that’s fairly critical to video editing. Right now the only transition is cut, we plan to add the ability to mix things up by providing extra transition types.

Finally, in terms of our more immediate planned features, we have the larger item of a title editor. Using our experience of building out scene editors and overlay editors, the title editor will be fully featured with a focus on being easy to use but powerful.

That’s just what we can mention now, we’re continually planning out more for the video editor and are excited about where we can take it and how we can fill a void that other editors simply aren’t covering. With that being said, we like to think of the Express Video Editor as a community project and would love to get feedback from you that we can then take and then use to improve. We have a feature vote page where you can make suggestions but we plan on creating a dedicated page for our new video editor.